We're Number Three! That's not a chant you her often, but Louisiana Governor John Bel Edwards is touting it like it's a mantra.  He put it on his Facebook feed this morning. 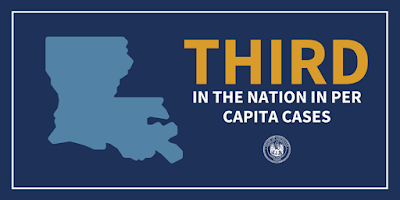 We're currently stuck in Phase Two, with a statewide mask mandate, and many people expect the governor to bring us back a couple of steps in the coming days.  Cases re climbing, statewide, and frankly, we're beginning to believe that the governor doesn't have a clue.  Not one single clue about how to solve this crisis.

He's got a tough problem on his hands.  He has to balance the China virus, the economy, personal freedom, his incompetent statisticians (see yesterday's post), and falling state tax revenue.  It's a bitter brew, but he actively campaigned for the job.  I have no sympathy for him.

Some of the comments on his Facebook feed are priceless.  These people have no indication of what is happening to the economy.  For example:


then why are you letting pointless businesses open?

There are no pointless businesses.  Every business is essential to the owners, employees, and customers.  Government should not be in the practice of choosing winners and losers.


Then WHY are we opening schools face-to-face??? Distance learning is the ONLY way to keep our kids safe.

Well, either you believe the science or you don't.  Current science tends to show that school-aged children are not vectors of the Kung Flu   They don't pass it to other children or adults.  Kids are at very low risk.  And, other services that schools provide are absolutely essential to a great number of children.

Because of the problem with the numbers, it seems that some people are being counted multiple times, and that's a fact.  The Governor needs to scrub his numbers and get an idea of the absolute scope of the spread of the virus.Someone is keeping a database, and it should be fairly easy to scrub the numbers.  If someone is not keeping a database, the governor needs to ask some very pointed questions about the competence of his statisticians.

I have perfect confidence that the medical doctors and nurses re going to figure this out.  But, the governor needs good numbers, and he should absolutely insist that the be given a patient count, rather than a number of positive tests.  I suspect that those numbers would be vaastly ifferent and give a better picture of the spread of the disease.

Anything less is political malpractice.
Posted by Pawpaw at 8:48 AM

"school-aged children are not vectors of the Kung Flu They don't pass it to other children or adults."

Anecdote:
Well, except for the parents locally who went out of town and left their Seniors in HS at home ... 40 kids at a party, drinking and sharing vapes. ~20 of them tested Covid Positive afterwards. All school sports shut down for 2 weeks.