We've all heard the jokes about the guy who buys his wife a new stove for Christmas.  This isn't that joke.  Belle has always made more money than I, having the good sense to get into nursing years ago.  Registered nurses make very good money.

Belle had been talking about upgrading the stove in the shop, and yesterday she told me that she intended to go to Lowe's and look at stoves.  I grabbed the truck keys to take her, because I know how these things generally work out.

We got to the store, ad she browsed the offerings, comparing and contrasting, and weighing all the options.  After looking, weighing, and thinking, she settled on one particular range.  Of course, it was not in stock.  So, we thanked the guy and drove across town to the other Lowe's, who happened to have it in stock.

It's a Samsung ceramic top range, and it looks a lot like this. 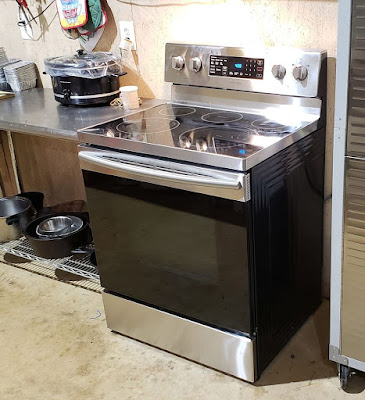 This thing has more bells ad whistles than a steam locomotive.  After installing and leveling it, the boys were hungry, so she whipped up a shepherd's pie, using both the stove top and the oven.  She seems to be quite pleased with her new purchase, and I'm not complaining.  We will get a lot of use out of it during the coming months.
Posted by Pawpaw at 7:30 AM

I hope it doesn't have too many bells and whistles! One year we went to my daughter's home for Christmas dinner. She cooked for two days on her brand new top of the line stove (a present from her husband). When we got there most of the meal, including a ham and a turkey, was keeping warm in the huge stove. This included side dishes and two pies on different rack levels. When it was time to eat the stove door would not open and the complete machine shut down! Disassembly attempts and referrals to the instruction manual were of no avail. A desperate call to the 800 number on the manual revealed the awful truth. We had not been struck by an EMP that targeted appliances, no, her top of the line stove was internally programmed to shut down and lock during all major Jewish holidays! This was timed to start at midnight Greenwich time and last for 24 hours or the length of the holiday.
We had pizza from Dominos and $3000 new stove was sold on Facebook the next day for $50 and you pick up!
Still a sore topic at daughter's place...

Mrs Termite's stove is a sealed top ceramic one also. If ya'll boil over/burn something to the top, an excellent cleaner is.....Fast Orange hand cleaner. A couple of squirts of Fast Orange on a scrubber sponge and some "elbow grease", and it will cleanup nicely, without scratching the top.

Nice, but I'm not sure if it would be safe to use cast iron on that cooktop. If it gets scratched, that could be a BIG problem.