Two weeks ago, I picked up a bunch of empty brass from the folks who hosted Texas State.  We are going to use the brass for Louisiana State, and pass it off to Oklahoma for their shoot in early May.

Not all of the ammo at Texas State was shot, so I brought home some loaded ammo, and I inadvertently  left a few hundred rounds with the club in Texas.  They'll bring the remainder when the come to Louisiana next week.

For the last two weeks, the club has been loading ammo, and just about everyone got in on the action.  This morning, Zach and I went out to the shop to make the final push, and I've loaded every piece of brass I can find.  By my primer count, we loaded  7800 rounds of wax bullet ammo in the past two weeks.  Zach and I alone, loaded 1100 rounds today. 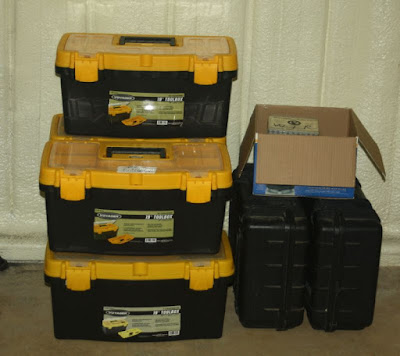 Those boxes contain 9600 rounds of wax bullet ammo.  That should be sufficient for our state shoot next week.  Now, to begin checking lists to get everything to the church.
Posted by Pawpaw at 3:47 PM