I profess a love and long abiding respect for the .35 Remington. The cartridge has been around a long time. It was originally chambered in the Remington Model 8 rifle in 1908. It's probably the last of the line of mid-powered rimless cartridges that were designed for early autoloaders of that period. Framk Hamer used a Remington Model 8 in the ambush that ended the career of outlaw Clyde Barrow.

When I was a tender youth, my buddy shot a .35 Remington and propounded on the advantages of the cartridge as a dense woods deer rifle. I couldn't afford a centerfire rifle, but I listened to my buddy and dreamed of the day I could put cash down on such a masterpiece of engineering. Then, one day when I was in college I was walking through a hardware store and saw a Marlin 336 in the rack. I asked to look at it and saw that it was chambered in .35 Remington. The price tag, new in box, was $87.50, still more than I could afford, but the counterguy told me that they had a layaway plan. So, I plunked down $10.00 to hold it, and started saving my pennies to buy the rifle. In ninety days it was mine, paid in full, and I realized I didn't have enough hard cash to afford ammo, so I waited another 30 days to afford $8.00 for a box of Remington ammo.

A friend of mine went with me to a convenient pipeline and we set up a target and sighted the rifle. I still had 10 rounds of ammo left at the end of that exercise and no more money in my pocket.

Several weeks later I was walking down a logging road with Joe Duhon, a classmate, in the Kisatchie Forest just south of Provencal, LA. We were late getting to the woods, Joe having stuck his Volkswagen in a mud hole. As we walked down Kisatchie creek, a deer stepped out of the trees and started across that tiny road. I threw the rifle up, snapped a shot and Joe and I were surprised to watch the animal spin around like he was pole-axed and drop into the dust, dead as Het. The deer kicked twice and lay still. Joe and I looked at each other, then started pacing the distance. Eighty-seven long steps. When I examined the deer, the reason for his demise was apparent. The big 200 grain bullet had entered at the point of the right jaw, traversed the neck and come out on the other side of his head. He was a middling spike buck, but for two starving college students he represented a lot of meat. Getting that deer into Joe's Volkswagen is another story. Suffice it to say that the front luggage compartment was covered in blood before we unloaded it.

The .35 Remington is considered a rather anemic cartridge. It throws a 200 grain bullet at about 2000 fps. It's long been overshadowed by other cartridges, but every deer I've killed with that rifle has exhibited much the same tendencies. They fall over, kick once, and die. There's something about putting a 200 grain slug into play that seems to end the discussion. The old slow-moving cartridges do a magnificent job when used the way the old-timers intended them to be used. 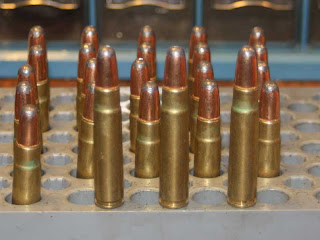 I use just one bullet in the .35 Remington. The Remington Core-Lokt 200 grain bullet. Pushed by IMR 4895, it trundles along and hits the target with surprising accuracy. Marlin still makes the 336 in .35 Remintgon. At 38 inches and 7 pounds, it's pretty much a perfect woods rifle. I suspect they cost more now than when I bought mine in '74. At some point, I put a 2X Simmons scope on my rifle and it's taken several deer over the past 38 years.

Several years ago, I passed that rifle down to my son, who also has sons. We were talking about an upcoming shooting trip and he mentioned that he was thinking about bringing the Marlin. I rummaged around on my bench and found some Winchester brass and a few old left-over Core-Lokt bullets. We'll see next week if the rifle can still shoot.

Yeah, there are faster, flatter shooting cartridges out there, but there's something special about the .35 Remington.
Posted by Pawpaw at 9:28 AM

I hunted in northwestern Mississippi as a young man with my Papaw's Marlin in 35 Rem. Took down a couple of deer with it. He's been gone awhile but I still remember he cracked the stock when he had it lashed across the back of his 3 wheeler when he misjudged the amount of space between the two trees he went through. Was easily repaired. My cousin got that rifle and I'm sure pawned it or had it stolen. The 35 Rem brings back good memories of my Papaw. Thanks.
Jerry in Wisconsin

Nice write up.
My Father has hunted with a Remington Pump for 50 years now with a.35 Remington Model 760. He paid 60 bucks for.
A Combat Vet and CIB holder he could shoot that gun.
"Go put that jug or 2 out there about 150 years or so" he would tell me. So I would trot down the ridgeline we hunted for years and drop them in the middle of it.
Then he would pop them both and call it good.
With iron sights.
He loves it.
And put many a deer in the freezer and never did we have to track one.
He is 80 now and has said it will be my youngest boys when he is done deer hunting.
Which I hope will be a while yet.

My brother's deer rifle is a Marlin in .35 REmington. The first deer he shot with it dropped just as you described yours dropping.

I have only fired it at paper targets and coffee cans full of water but it is a fun gun to plink with too.

Came close to buying a Model 8 in .35 several times.

My son got his first big game critter, a Black Bear, with a Marlin 336 in .35 Remington shooting Remington core-lokt ammo. It's a great round and the 336 is a great rifle.

All the best,
Glenn B

I grew up in Oregon, the wet side, where it is all woodland/brush hunting. My dad owned an old used 35 Marlin and we used it for years. I don't think I ever remember a deer walking (or running) away from that rifle. It dropped them in their tracks. I consider it the perfect deer rifle for woodlands.

I have my PawPaw's Remington Model 760 in a .35 Remington. They stopped making them the year I was born, but I'm sure it is older still. I've only taken up hunting recently, but I have fired 5 times, with one miss (shot way past my range) and 4 hits for 4 8-point bucks.

I stumbled upon your post in my search for another box of ammunition. Thanks for the post!

Interesting blog. This is one of my favorite blog about hunting and I also want you to update more post like this. Thanks for sharing this article.

Camping is allowed in Union Ridge Conservation Area. The areas around parking lots fill quickly during the firearms deer season. See the regulations at the link below for more information.
Deer Scent